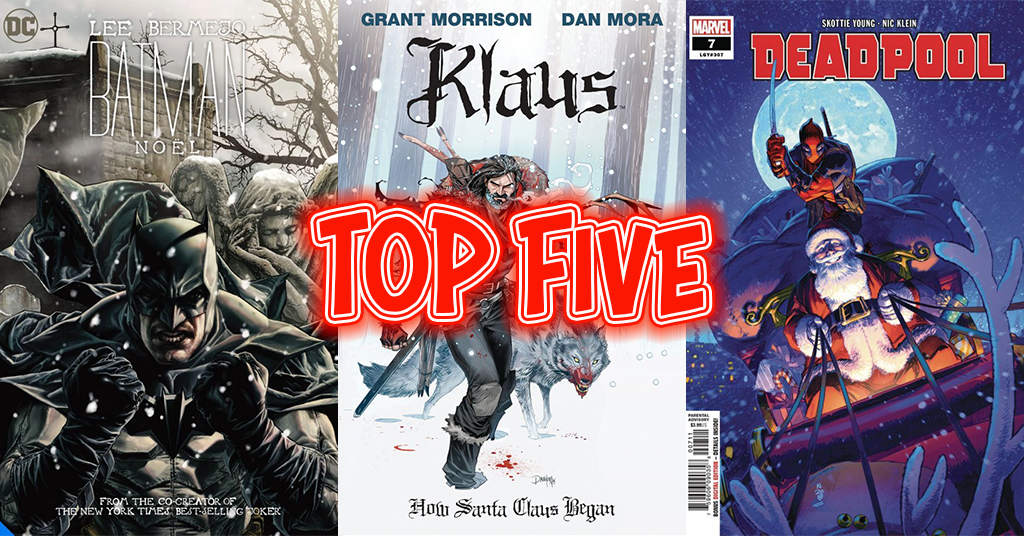 Now that Thanksgiving has come to a close and we're getting ready to celebrate the winter holidays (Christmas, Hanukkah, Yuletide, etc.), the world around us seems to transform before us. Decorations, lights, food, drink, almost everything has a touch of the holiday spirit, and comics are no exception.

I'm a huge fan of comics and love the holidays. So I thought I would share with you my top 5 comics that are connected to the holidays.

If after reading this top 5 list you want to explore more holiday-themed comics, check out this list of holiday-themed comics I have started (it is still a work in progress but let me know if you have any suggestions). I also discussed some of our favorite holiday comics with fellow Nerd Initiative member, Bumpkins, on an episode of my show, "The Captioned Life." You can listen to the show on your pod player of choice or watch the YouTube video below.

So here's the deal with this issue - even though it's on my #5 spot, I personally did not enjoy it. In fact, I don't think I would ever read it again. When I first read the issue I was confused because I thought it was taking place during one particular Christmas but the whole issue takes place over a lifetime of Christmases for Batman and Catwoman. Even more, I did not like the way the book ended and it was very depressing in the last third of the issue.

That said - I did list it here for this article because there are some redeeming qualities of this and I do think that the majority of you may, somewhat at least, enjoy it. It shows Batman and Catwoman's lives together through the holidays, you get some new details and insights on the characters that you may not have known before, the artwork is enjoyable, and it is a different kind of story that you may not have read or seen before. Plus, it's one of the few books out there that is solely based on the Christmas holiday (which is even doubly interesting considering that Bruce Wayne is Jewish - not sure why Hanukkah isn't mentioned).

If you want a silly, enjoyable comic about a superhero duo who has to save Christmas, then you should definitely read this comic. This is part of a larger duo series of the two titular characters that takes place during the holiday seasons but can be read as a stand-alone issue, so no need to have to read any issues prior to this.

After a moment of sadness for Spider-Man spending the holidays by himself and a hilarious Avengers party thrown by Deadpool (who eventually gets kicked out), the duo find themselves in a fight for their lives when ancient being Saturnalia wreaks havoc in New York City, killing and beheading people dressed as Santa for perverting his holiday. After a few battles with the surprising deity, the duo realizes that they need to show Saturnalia what Christmas is really all about as they take him through events and experiences that truly make it the most wonderful time of the year!

If you liked Spider-Man/Deadpool #12, then you'll love this issue! A solo issue of Deadpool who is set out to... kill Santa?!?

A group of children hires Deadpool to assassinate Santa after they woke up on Christmas morning with no presents from the not-so-jolly St. Nicholas. Deadpool, not being one to deny a child's wishes, accepts the job (after the kids give him more cash than he thought possible from a, well, group of kids). During his mission, he encounters some hilarious moments at the North Pole, which include a gunfight with Mrs. Claus and a drunken battle with a skinny Santa. But after the Merc With A Mouth listens to Santa about what really happened on Christmas, Deadpool set out to make it right and eventually helps Santa delivers his Christmas presents to all children of the world.

I just recently read this book and I have to say that this is one I wished I knew about when it first came out. As a holiday comic, it was so well written, and as a form of visual art, it's something I haven't quite experienced before.

Batman: Noel is an adaptation of the classic holiday Charles Dickens story, A Christmas Carol, using the world and characters of Batman to tell the story of Gotham's modern-day Scrooge, Bruce Wayne/Batman! It's not an exact adaptation but the narration does a great job of tying in those story details so that as you read the story, you know that it follows the Christmas Carol formula. There are no Christmas ghosts in this story but rather figures that represents Batman's past, present, and future. The Christmas Carol story serves as a frame story while the main story itself could still be told on its own. The art is fantastic and the use of lettering for the narration is captivating.

Written and art by Lee Bermejo. Published by DC Comics on November 2nd, 2021.

No matter what holiday comics I'll read in the future (or ones that I finally read that have been printed ages ago), Klaus will always be at the number 1 spot for me.

The story is a whole series about a Viking named Klaus, who is the original Santa Claus. The original series is a 7-issue story arc that takes place roughly around the 1600s within a fantasy version of our world, showing Klaus as a former general warrior who visits the once joyful town of Grimsvig during the Yuletide season. However, he finds that the town is now under the totalitarian control of Magnus, who has banned joy and presents. Enraged with how the people are treated (especially the children), Klaus sets on a mission to bring joy back to the town, delivering toys to the children, and engaging in a physical fight with Lord Magnus, his army, and the legendary Krampus. Along the way, we see how Klaus eventually receives his magical powers, his past, and his reuniting with his long-lost love. This story fills in a lot of the details and origins of the traditions of Christmas/winter holidays, as well as some new details (for example, he has a man-sized white wolf named Lilli!)

Since this story was published, there have been four additional one-shot stories that are just as fantastic as the original series. And this year, the publisher of Klaus, Boom! Studios have created a Kickstarter where they are releasing a bound book that collects all of the series' issues. I cannot recommend this series enough - you should definitely consider getting it!

Although I have listed my top 5, there are a couple of issues I want to recognize as honorable mentions.

I have not had a chance to read this issue because I do not have a physical copy and it is not on Marvel Unlimited (at least not that I've found, anyways). But this issue is always brought up because this contains the story of how Santa Claus was confirmed to not only be a mutant (omega-level) but supposedly the most powerful mutant ever registered by Cerebro.

Although this is not an exclusive holiday-themed comic series, some issues of this Hawkeye run do take place around the holiday season. Being the inspiration for the Marvel Studios show of the same name, this is a must-have series to read and it's perfect to read at any time of the year. It has a great story, an awesome duo of Clint Barton and Kate Bishop that is both witty and hysterical, and just an overall great story with amazing art from Aja and Hollingsworth.

So those are my top 5 holiday-themed comics! What are yours? Let me know by tagging me on social media, @CaptionedLife!

This article was originally written and published for Nerd Initiative on December 1st, 2022.