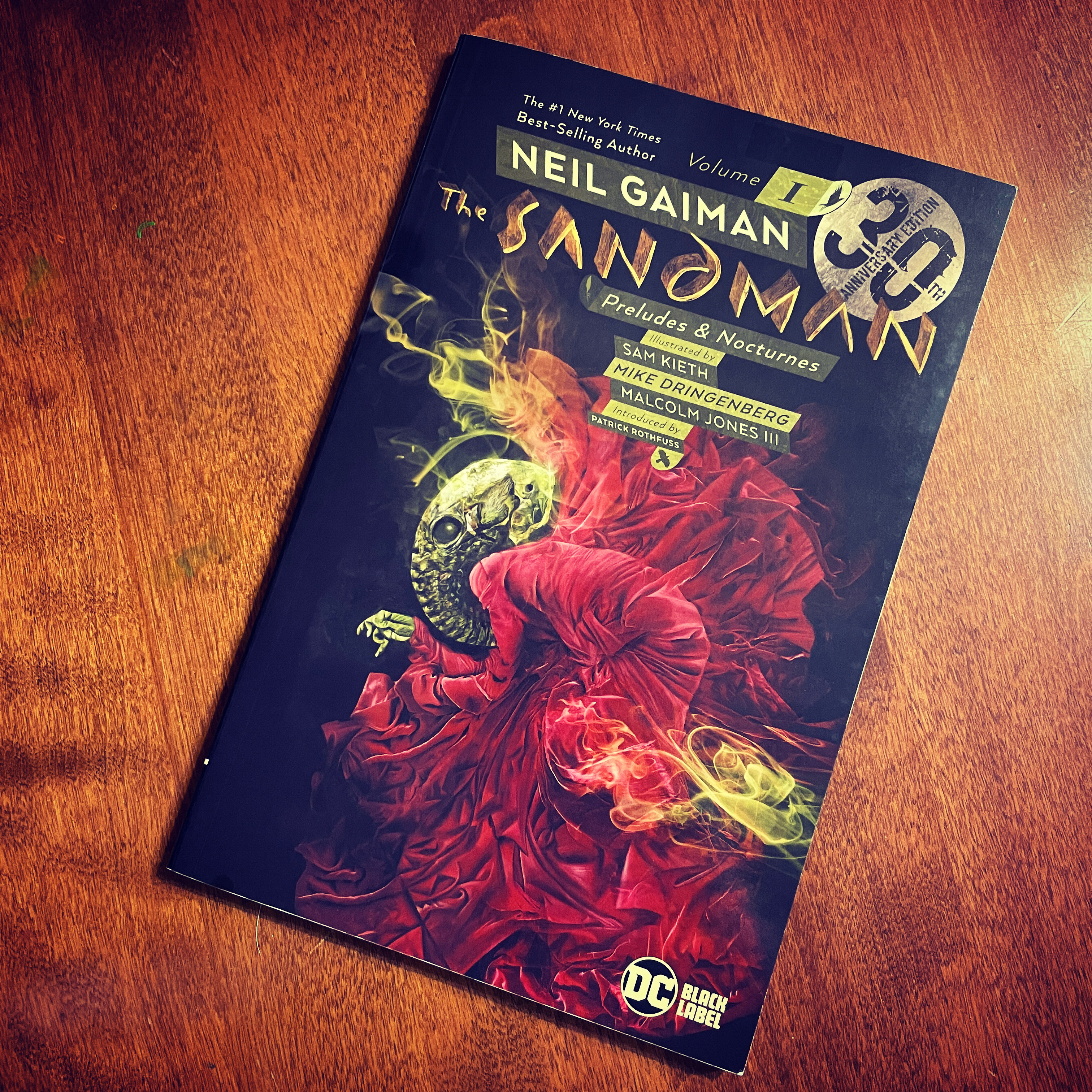 To begin, let me say that I have never heard of this comic until a few months ago. The first time I heard of it was when Netflix announced that they were doing a series based on the comic by Neil Gaiman. But then my interest was piqued when controversy erupted over the casting of non-binary and people of color for the characters, which Gaiman defended the casting choices (and rightfully so!). So after reading about this, I decided to read this 30-year-old series, trekked over to my local comic shop and bought the trade to read.

I will tell you that I was pleasantly surprised by this comic. As a millennial, I saw a lot of references and reflections of the pop culture that was really present during the 80's, yet it still can be appreciated after 30 years of its origination. I also had no idea how steeped it got into other DC characters and worlds, so imagine my surprise when I saw Arkham Asylum and John Constantine making an appearance in the series. Being a Batman fan, it definitely got me hooked when I saw that reference, but the more I read, the more I fell in love with this story, wanting to get the next issues of The Sandman the next chance I can get. (Also, for those of you who are fans of the TV show "Lucifer", the character is based off of this story.)

For those of you who are great fans of Neil Gaiman's work, don't hate me here - but I have actually never read any of Neil's work before reading "The Sandman". I've always heard of Neil and his work but this was the first time I've read anything by him. Now, I realize what I've been missing out all these years and wished I was introduced to his work before I hit my mid-30's.

That said, I'll be honest and say that the first issue of the series "Sleep of the Just" was a little slow and confusing for me. Gaiman did a great job setting up the story for Dream/Morpheus to get introduced with the conflict, but it did take some time setting it up, and there were other side characters that were affected (I believe) by his absence (presence?) that made it interesting, but I'll admit I am still confused and lost by the connection and what their purpose is. I may need to go back and read it again to try to figure it out, but I think that if it's lost on me as a reader the first time around, it tells me that they should have had a stronger (more obvious) connection to the main storyline, or removed entirely. So this issue was definitely a struggle for me and made me question if I wanted to keep going.

But I'm glad I stuck with it because once I got into "Imperfect Hosts," I couldn't put it down. The imagination that Gaiman had here in how to cross realities so seamlessly that you go from one plane to another with Dream without questioning or realizing it. Being able to write a character that is an abstract idea and personify it with such empathy and emotion is amazing. The challenges, intelligence, and strategies in the writing makes "The Sandman" a must read for anyone who is interested in getting into comics, especially if they are looking for one that isn't associated with the traditional superheroes of DC such as Batman and Superman. As you read Dream's journey to gather his tools and get back to his plane, you can't help but reflect on your own reality and relationships with others. This kind of writing can be a masterpiece in any sort of medium and not just comics.

As great as Gaiman's writing is, the artwork by Kieth, Dringenberg, and Jones elevates the story that much more. Honestly, I think this is the only artwork that could do the story justice. The depiction of Dream in the human world worked so well. He's a being that others interact with but you can tell by the artwork that he is not of their world. The illustrators did such an amazing job being able to visualize and make such realities from vast ideas come to life in a way that makes them so distinct yet still allows them to live in the same universe that doesn't make reading it so jarring when you go from plane to plane.

I can only imagine how challenging and exciting this was for Kieth, Dringenberg, and Jones. This seems like it is so different from any other story and comic that as an artist, this must have been an excellent opportunity to let the creativity flow in such a way to develop a world that exists in an existing DC Universe so as to be able to create something new without disconnecting it from where it lives. And even though this was drawn over 30 years ago, the panel and page design that they developed allowed you to not just read about these planes of existence but to also experience it. And that's the goal of any creative, right?

I don't know when I'll be able to get the next run of "The Sandman" in this story arc (mostly because I have a stack of comics still waiting to be read), but it can't come soon enough. The existentialism that the writing brings, paired with the artwork that makes this world so realistic, is something that is unparalleled in any other comic story I've read. It's not just a nice break from the traditional DC Comics that I'm used to reading; it brings you into a world of chaos and order and makes you reflect on what makes us human and how do we experience empathy in a way that we can bring that into our own reality.

If you haven't read this trade yet, I highly recommend that you put this on your list the next time you visit your local comic shop. Again, bear through the first issue as it does set up the rest of the story, and you'll love reading about Dream and his quest to return home.