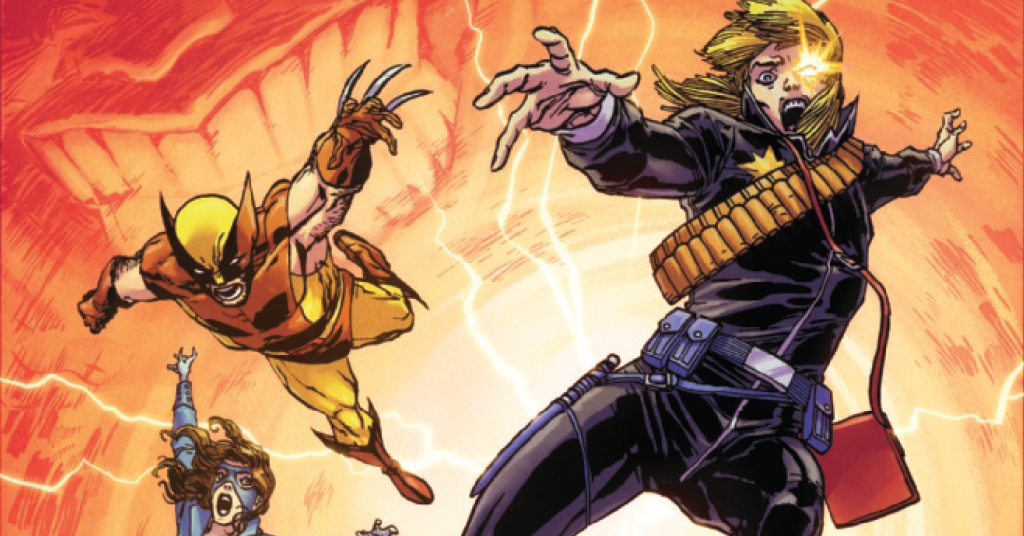 CAN THE X-MEN SURVIVE MOJOWORLD? IT'S A LONGSHOT! Ann Nocenti returns to her co-creation with an all-new story set after the original LONGSHOT miniseries! Longshot's adventure on Earth may be over, but before he can continue his mission, he's pulled into Mojoworld for a multi-picture deal he simply can't refuse. And when WOLVERINE and SHADOWCAT investigate the mysterious psionic disturbance, will they be able to escape the pull of Mojoworld before things SPIRAL out of control? 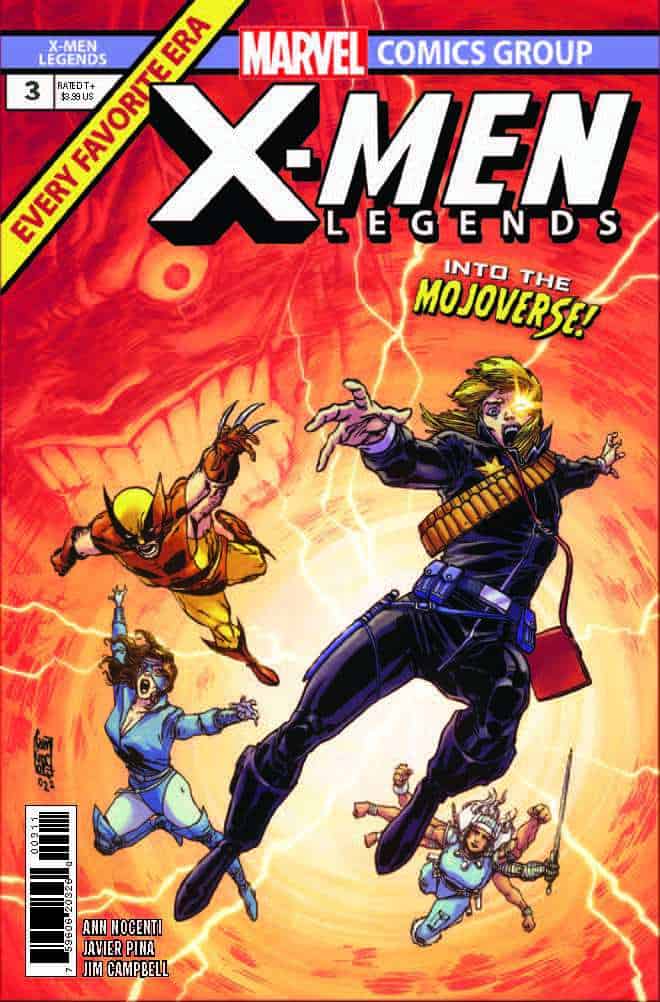 If you’re like me, you’ve probably only heard of X-Men Legends associated with the toys and think that it’s a brand to get you excited for the classic X-Men Legends. If you’re not like me and you know all about X-Men Legends, then I applaud you and your commitment to the obscure areas of Marvel comics.

So going into this issue, I have very minimal knowledge of the stories or characters associated with this story. And part of me is unsure if that helps or hinders my ability to enjoy this comic.

I am not overstating it when I say this is probably one of the more bizarre issues I’ve read since I started reviewing comics for Comic Watch. I honestly have no idea what’s going on, it’s this weird universe where something called Mojo is trying to create some sort of weird reality TV by manipulating X-Men members and calling it cinema and the characters are just so outlandish.

I don’t hate it, but I don’t love it. It’s more like a fixation on the oddest experience you have and it’s your own personal puzzle you’re trying to solve. 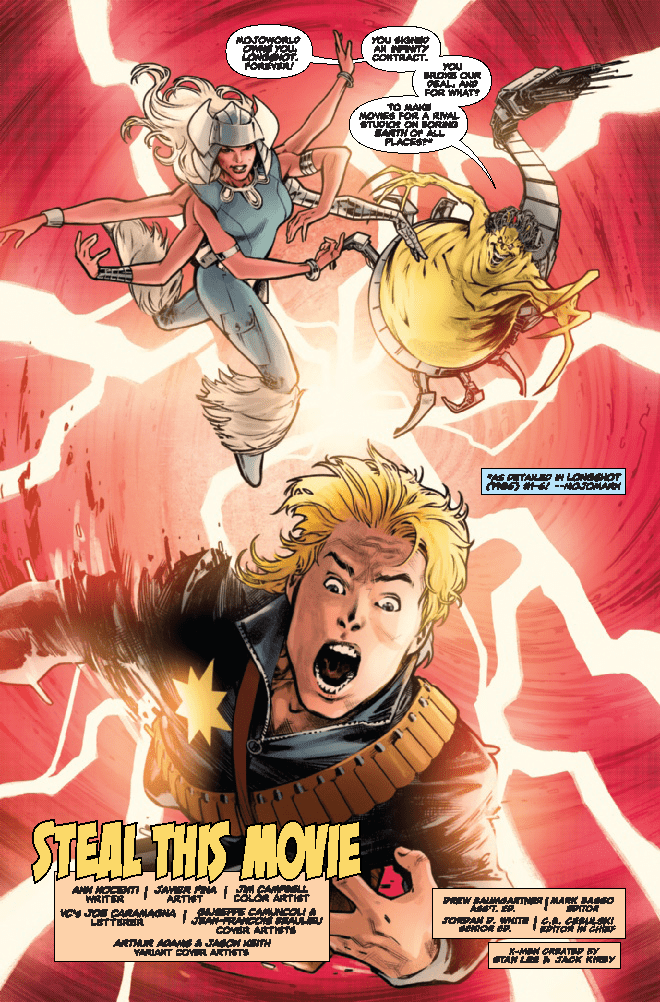 The whole story opens up with Mojo and Spiral trying to capture and bring Longshot back from wherever they are at (Earth, maybe?) to the Mojoverse. Apparently, Longshot signed an infinity contract that gave him some sort of power to become a movie star and Mojo wanted his talent to make a weird reality snuff movie/series back on his home planet in a town called “Mollywood.” Just typing this out and reading the first few pages of this comic makes you laugh out loud and again, I am still trying to figure out if this is so outlandishly terrible or brilliantly great. I’ve never read a comic with a premise like this before with some popular characters in a way that makes me doubt that if I don’t like it, maybe there’s something wrong with my tastes.

Nocenti writes the main characters well, I think. Longshot was a delightful character to read, Spiral is that voice of reason that keeps getting caught in the middle because of her partner/boss’s decisions, and Mojo is just a wild character that you have to write his dialogue wildly in order for the character to make any sense. I feel like Nocenti was given a challenge and she doubled down on the bizarre situation she was given. 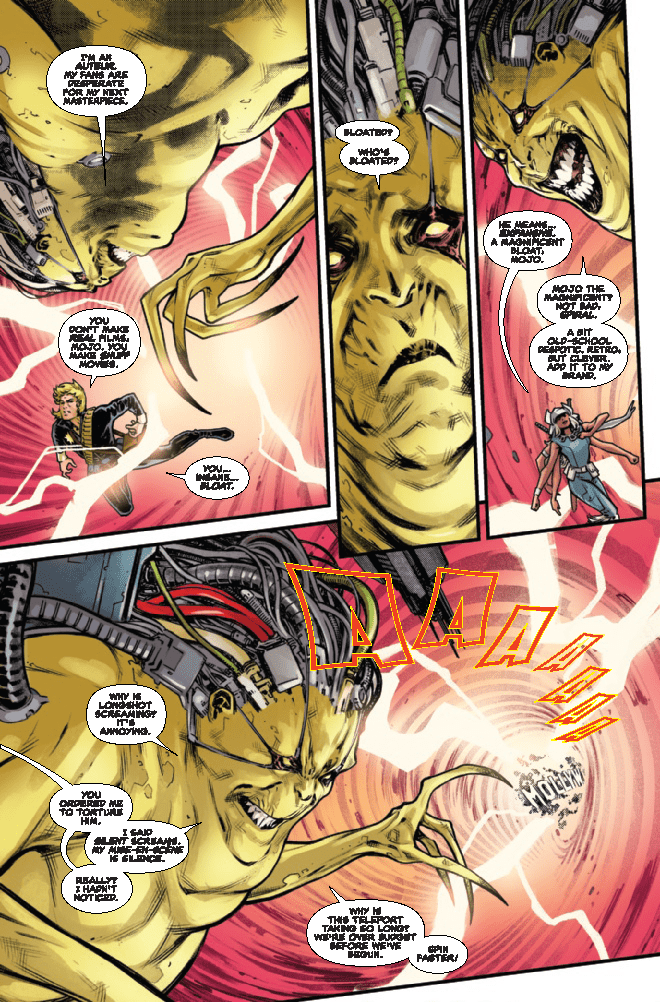 The art fell a little flat for me. And again, I think it’s because this is such a strange property to write for that they probably had to tone down the characters a little bit by coloring them in a flat scheme. I felt myself physically repulse at the sigh of Mojo every time he appeared. The world around it was like a “What If” issue of Mojo running the entire 616, all with what appears to be butting up against the aged look of the characters, meaning that this story seems to be picking up from events in the 80’s that they had to blend some of those art styles in there as well. This alone is such a huge challenge that I don’t know if anyone could have a better job than this.

Overall, this is definitely an experience. It's not a series I would read again just because it doesn't appeal to me, but that doesn't mean it's bad. It's just something that I still have no idea what my own opinion is about the issue and the story. So this is one that you should try to read an issue (maybe cheap on digital or borrow someone's first) to see if this is something you'd like to read for yourself.

This review was originally written and published for Comic Watch on October 26th, 2022.