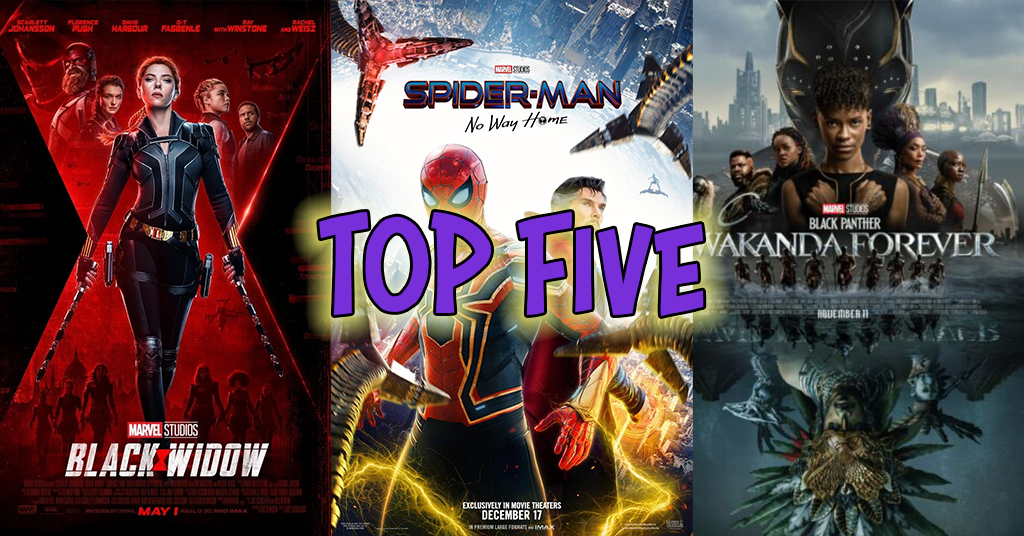 Black Panther has been out for two weeks now, marking an end to Phase 4 of the MCU (unless you're counting Guardians Of The Galaxy Holiday Special). To celebrate, I wrote an article last week about my top 5 favorite moments from the shows that are a part of the MCU Phase 4. So now I wanted to share my top 5 moments from that same phase's films.

The list here is not in any particular order other than in chronological release date. This is not an indication that one moment may be better than the other due to the order of the list. However, if you do want to hear more about some of my favorites overall from Phase 4 of the MCU, check out my podcast episode where I discuss this with special guest Tara Kearns of the "There Was An Idea..." podcast.

Although I do not enjoy ranking my favorite movies in the MCU, I have no issue with saying that Shang-Chi and the Legend of the Ten Rings is definitely my favorite from Phase 4 for many reasons. The fight scenes of WenWu with Li & Shang-Chi are by far one of the most beautiful, poetic fighting choreography that I've seen in quite some time. I love the parallels that they used to show defining moments for WenWu in how he fought his wife and son in the same way, and the choreography resembles a dance in the sense that there was meaning and passion beyond the hitting. There is so much to unpack in these two scenes that I could do a whole article breaking down those two scenes alone.

#2 - Spider-Men On The Statue Of Liberty

I would honestly be surprised if this scene didn't make it into someone's top 5 moments from Phase 4 of the MCU. Spider-Man: No Way Home was the most anticipated movie since Avengers: Endgame, and as we got closer to the release date, it became apparent that they were going to bring back and retrofit the characters from the previous Spider-Man installments into the MCU. Seeing Tobey Maguire and Andrew Garfield back in their roles was really great to see, and I'd argue that this was probably the best performance in their roles (especially Maguire, who I thought played an older, wiser Peter Parker/Spider-Man better than his original trilogy films).

Although there were many moments for the audience where we all cheered in the theaters (I'm looking at you, Charlie Cox), the moment when the three Spider-Men landed on the top of the Statue of Liberty was almost a dream come true manifested. This was truly nostalgia at its peak for many Marvel fans.

Now if you know me, you probably would be surprised by this selection, given that I am not a fan of the character, Doctor Strange. However, I can still put my own biases aside and recognize good art, and this was definitely one of the most engaging and creative scenes in Phase 4 of the MCU in my opinion. This fight scene was very unexpected and mesmerizing, to say the least. This was such a fun and creative way to do a magical battle, and it was such great composure and harmony between the visual and audio elements. This is one I can watch over and over again, and there truly isn't any other fight scene like it in any superhero genre film.

This scene from Thor: Love And Thunder was also a very well-done and visually engaging scene. The use of colors was magnificent, initially using a monochromatic black-and-white color grade then adding in color from power lighting sources that emit from Mjolnir, Stormbreaker, and Zeus' lightning bolt. In addition to the coloring, this scene showed the protagonists and antagonists fighting on a tiny global planet where you can see the characters run on top of the surface of a globe. Whether you enjoyed the movie or hated it, this scene is definitely one of the best parts of this movie.

Although I'm still sorting through how I personally feel about Black Panther: Wakanda Forever, I will say that Angela Bassett and Danai Gurira gave such an impassioned performance, especially in this scene, that they deserve some sort of award for it. We as an audience brought in so much emotion and grief with the passing of Chadwick Boseman that the last year we've been wondering how they were going to handle his character and how we were going to be able to move forward.

Although this scene and conversation were not directly about the passing of T'Challa, those emotions of grief and loss were at their peak in this scene. Ramonda being angered with her own loss of her entire family, relieved Okoye of her role as the general of the Dora Milaje, which we the audience felt that sting with Okoye. Okoye has been such a strong, unwavering character in the MCU, but at this moment we see her vulnerable, begging to not be dismissed and asking for a chance at redemption. This entire scene was nothing but raw emotion and we felt it through the screen it will leave an imprint on us for the rest of the MCU's time.

Those are my top 5 moments from MCU Phase 4 movies. Tell me what your favorite moments were.

This article was originally written and published for Nerd Initiative on November 26, 2022.