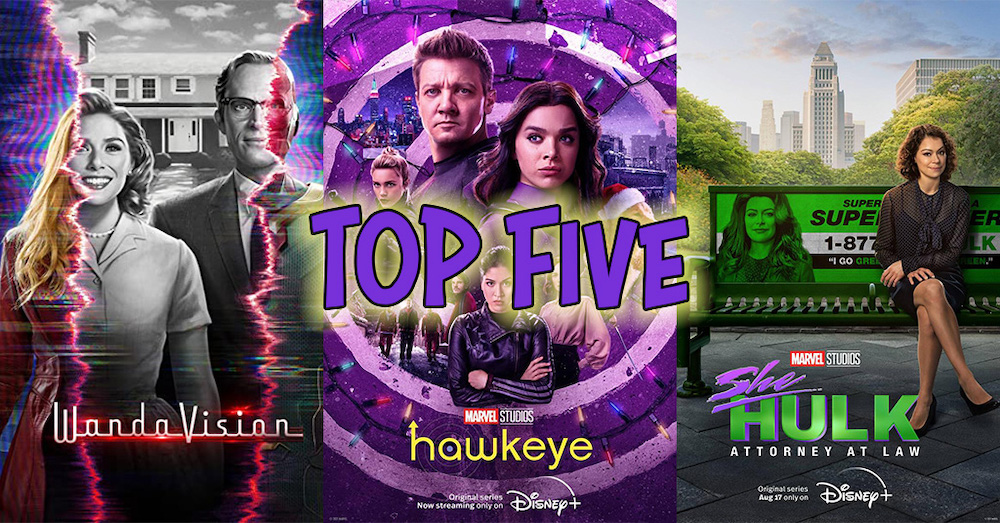 With the release of Black Panther Wakanda Forever signaling the end of Phase 4, there’s a lot that we can take a look at from the past two years to appreciate among the amazing stories that Marvel Studios have given us. And I know there is still debate on if Guardians Of The Galaxy Holiday Special is technically part of Phase 4, but that may be a discussion for another time.

Right now, it’s been a trend for people to share their rankings list of the Marvel Phase 4 project. Personally, I am not a fan of the rankings list because it sometimes implies that the movies at the end of the list are bad movies, which may not be the case at all. For example, I would put Black Widow down at the end of that list for me but not because I thought it was a bad movie – I liked it! But rather, I enjoyed the other movies more.

But I did want to share my top 5 favorite moments from MCU series that took place in Phase 4 and aired on Disney+. Phase 4 was the first phase to give us Marvel shows, so this list feels fitting in some ways!

This is in no particular order other than it is chronological in terms of release.

This one was a must-list item for a number of reasons. First, if you’re not familiar with who this is, Evan Peters played Peter Maximoff in the second-generation X-Men films that starred James McAvoy and Michael Fassbender. It’s a version of Pietro Maximoff from the MCU (and in case you weren’t aware, Pietro was killed in Avengers: Age of Ultron).

Second, I’m a huge X-Men fan. So when Evan Peters came on the screen, it was a pleasant surprise that potentially had so many implications – the biggest being the X-Men may be coming back to the MCU sooner than we thought (turns out this wasn’t the case, but it was still a great experience to talk about this at the time!).

Lastly, this scene is one of the few moments that got an actual, physical reaction from me. When Peters showed up, I literally screamed and did my best Leonardo DiCaprio finger-pointing moment. My wife didn’t know why I was freaking out, so I had to explain what was happening.

But I was even more impressed by the fact that this cameo did not appear to be leaked at all (before the episode aired) from what I could find. So it was a nice moment for all MCU fans to have that experience together

This was a powerful moment. The whole series explored so many topics and discussions that people needed to have, from the military complex to racism. Sam’s hesitation to take the mantle of Captain America led to a series of events that creates powerful moments for him, the prime one being his interaction with Isaiah Bradley.

And if you’re not familiar with this character, you NEED to check out his story in the Marvel Comics “Truth: Red, White, and Black”, which is inspired by the true events of the Tuskegee Syphilis Study where they studied untreated syphilis in Black men but was never given informed consent and was never given penicillin when it became widely available and the standard treatment for the disease.

#3 – Hawkeye & Hawkeye Vs. The Tracksuit Mafia

If you know me, you know that I love Hawkeye, both Clint Barton and Kate Bishop. And I also love the holidays. So when they announced they were doing a Hawkeye series that was going to be holiday-themed and based on one of my favorite Hawkeye runs, Hawkeye: My Life As A Weapon, I was instantly hooked!

This scene was amazing for a lot of reasons. It drew a lot of inspiration from the comics, the cinematography of the fight scene was amazing, the chemistry between Barton and Bishop is amazing and hilarious, the trick arrows, the classic car – I can keep going on!

Okay, you just have to watch it:

Honestly, although I love this scene, this episode is my favorite of all of the shows. It had action, drama, humor, and everything you’d like from a show. As a father, I cried during that heartbreaking scene between Clint, Kate, and Clint’s son Nathaniel, and as someone with hearing loss, the audio team did a fantastic job of recreating that experience for the audience with the sounds that Clint would hear when he’s taking his hearing aid on and off.

Okay, this is my top favorite moment. Sorry!

I’m a huge fan of Captain Marvel and Ms. Marvel comics. I love their stories and their characters. I also love Brie Larson as Carol Danvers and Iman Vellani as Kamala Khan in the MCU. So the season finale end credit scene where we see Kamala and Carol switch places was absolutely icing on the cake of a great series, Ms. Marvel.

This scene should be no surprise since we knew at the time that The Marvels featuring these two and Monica Rambeau (played by Teyonah Parris) was in development (previously titled Captain Marvel 2). But seeing Carol in Kamala’s room, which is a fan shrine of Captain Marvel, was a great moment to take in and be able to connect Kamala’s inspiration with the real hero.

This scene has created speculation that the Nega-Bands may be in the future of the MCU. We will have to wait and see when The Marvels premieres on July 28, 2023!

If you know me or have been following my content, you know I’m a huge Daredevil fan. I’ve been looking forward to the She-Hulk series because of the cast and story, but having Daredevil in the series is just icing on the cake.

Although I’ve never been a fan of Daredevil’s yellow suit, the MCU’s twist on the classic/original DD suit was actually done so well that I didn’t hate it.

I absolutely love everything about Daredevil in the series, from his humor to his action scenes – everything was just amazing. I especially love the callback to the series with the Netflix show music and the amazing one-shot take of the hallway fight scene from Season 1 of Daredevil.

But what I loved the most is the chemistry between Daredevil and She-Hulk. As heroes, they work well together and complement each other’s strengths. As Matt Murdock and Jennifer Walters, their romance was epic and contagious. As lawyers, they mesh perfectly well, even at odds in the courtroom. I honestly hope that we see more of Matt Murdock and Jennifer Walters in the future of the MCU!

So that’s my list! What were some of your favorite moments from the MCU Phase 4 series? Let me know!

This article was originally written for Nerd Initiative on November 18, 2022.