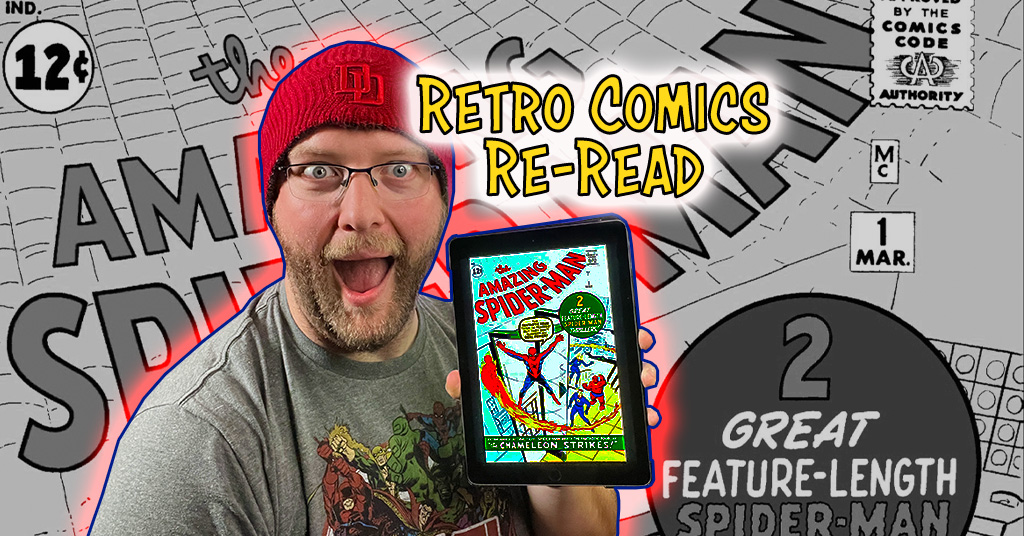 This article is part of a larger series. Check out Sean’s announcement and how you can send him suggestions for readings.

When I announced the series on TikTok, I got a lot of recommendations of which classic / retro comic I should read, and I’m very grateful for all of the suggestions. So I did what anyone would do when they try to decide which one to read first – I started with the first recommendation posted and worked my way down.

The first recommendation was from a mutual of mine, who goes by “BumpkinsTV” on TikTok and social media:

I wholeheartedly recommend Amazing Spider-Man. There are quite a few Silver Age books I don’t love but ASM is consistently good.

So after reading Amazing Spider-Man #1 (1963), here are my thoughts and discoveries about everyone’s favorite web-slinger

Amazing Spider-Man #1 – At A Glance

Although Spider-Man’s first appearance was Amazing Fantasy #15, his second appearance would be in his first solo issue. In this issue, it contains a four-part mini series: Part 1 is the recap of his origin story, Part 2 is Spider-Man springing into action by saving a space shuttle launch gone wrong (the pilot being the son of the infamous J. Jonah Jameson), part 3 is the rescue of the pilot and our first look of Jameson painting Spider-Man as the menace, and Part 4 (although the comic does not list it officially as a “part 4”) is Spider-Man trying to join the Fantastic Four then facing off with the Chameleon. This is one heck of a first issue!

As I read through this issue, here are some interesting details that stood out to me.

Even though the cover and title pages of Parts 1-3 lists the character name as “Spider-Man”, inside the story itself he is referred to as “Spiderman”. This happens in thought bubbles, dialogue, narration, and printed press! It is Part 4 where the name changes to Spider-Man. So far, it seems like one team wrote Parts 1-3 and another team wrote Part 4!

In the movies and popular media, we know the story; after Peter Parker competed in a wrestling match to get money for his family, he could have stopped a burglar but decided not to intervene, which led to Uncle Ben getting shot and killed outside in the streets of New York, and then Peter blames himself for his death, right? Well in this issue, that’s not exactly what happens.

In this issue, we’re shown a snippet of the origin and death of Uncle Ben that resulted in a burglary inside the Parkers’ home, which is where Uncle Ben was shot. The issue doesn’t mention anything Peter Parker not intervening earlier, nor does it allude to Peter Parker feeling responsible for his death.

Now to be fair, in Amazing Fantasy #15, it does give those added details, so the origin story is still the same with what we’ve seen in popular media depictions of Spider-Man (with the exception that Uncle Ben was killed in his own home), but it was left out here in this issue.

Spider-Man Thought About Turning To A Life Of Crime

One of the most noted reasons why Spider-Man has been popular is because he’s relatable as a human being, and I think this adds to that experience. In this issue, we see that he and his family are struggling financially and he feels like he’s limited in what he can do with his life circumstances so he contemplates turning to a life a crime. Thankfully, he talks himself out of it quickly!

Peter As A High School Kid In The 1960s Is… Interesting

So this was the ’60s and one of the most common tropes was that high schoolers who were smart and wear glasses were considered “nerds” and an outsider. Peter Parker here fits that mold perfectly. With the current MCU Spider-Man films, however, you can see that changes a little bit. Most notably because it’s no longer “weird” to be smart, which is why the film shows him being part of Midtown High, a school specifically for the gifted and talented.

But I think the oddest thing about this issue is that he looks… odd… as a high school student. In a lot of the drawings, he just looks awkward and actually looks more like an adult than a teenager.

In this issue, we see a lot of his spider powers beyond the traditional web-slinging and wall-climbing abilities. Apparently, he could use his senses to “tune in” to find and track the location of something. It’s unclear what exactly he can track (in this issue, it’s a helicopter, so maybe technologies?), but it’s a pretty neat sense he has there.

I also added one more panel here to show that in this issue, he describes his spider-sense as a tingle, which if you recall from Spider-Man: Far From Home, that’s how Aunt May described it! I love seeing these connections between the comics and the movies.

Again, I love how Spider-Man has these neat technologies from the very beginning! But if you know me, you also know that I love playing Fortnite so when I saw this panel, it reminded me of the web-glider that came out in the game when Spider-Man was part of the Battle Pass.

So those are the details that I picked up from reading this issue and I loved it. It’s been really fun going back to some of these first issues and getting a sense of how they started and how they changed and remain the same over time.

Below is my TikTok video going over these details. If there is a comic issue you want to suggest I read, feel free to reach out to me on social media (@CaptionedLife) and let me know!

This article was originally written and published for Nerd Initiative on September 8th, 2022.