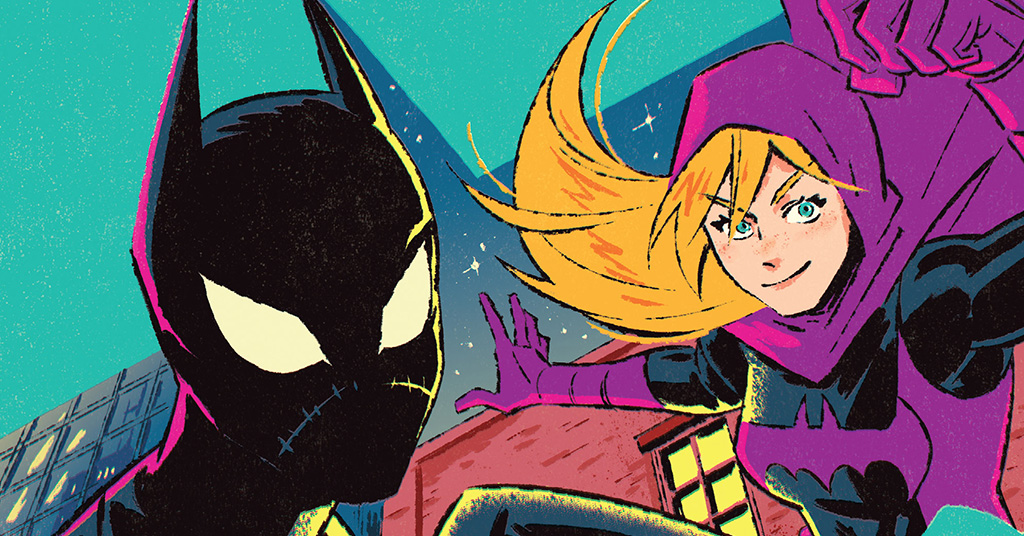 The Batgirls get help from none other than Gotham Academy's very own Maps Mizoguchi and her brother Kyle to help decipher a clue they found that could help reveal who the killer behind all the Hill murders is, which leads them straight into... the city zoo... 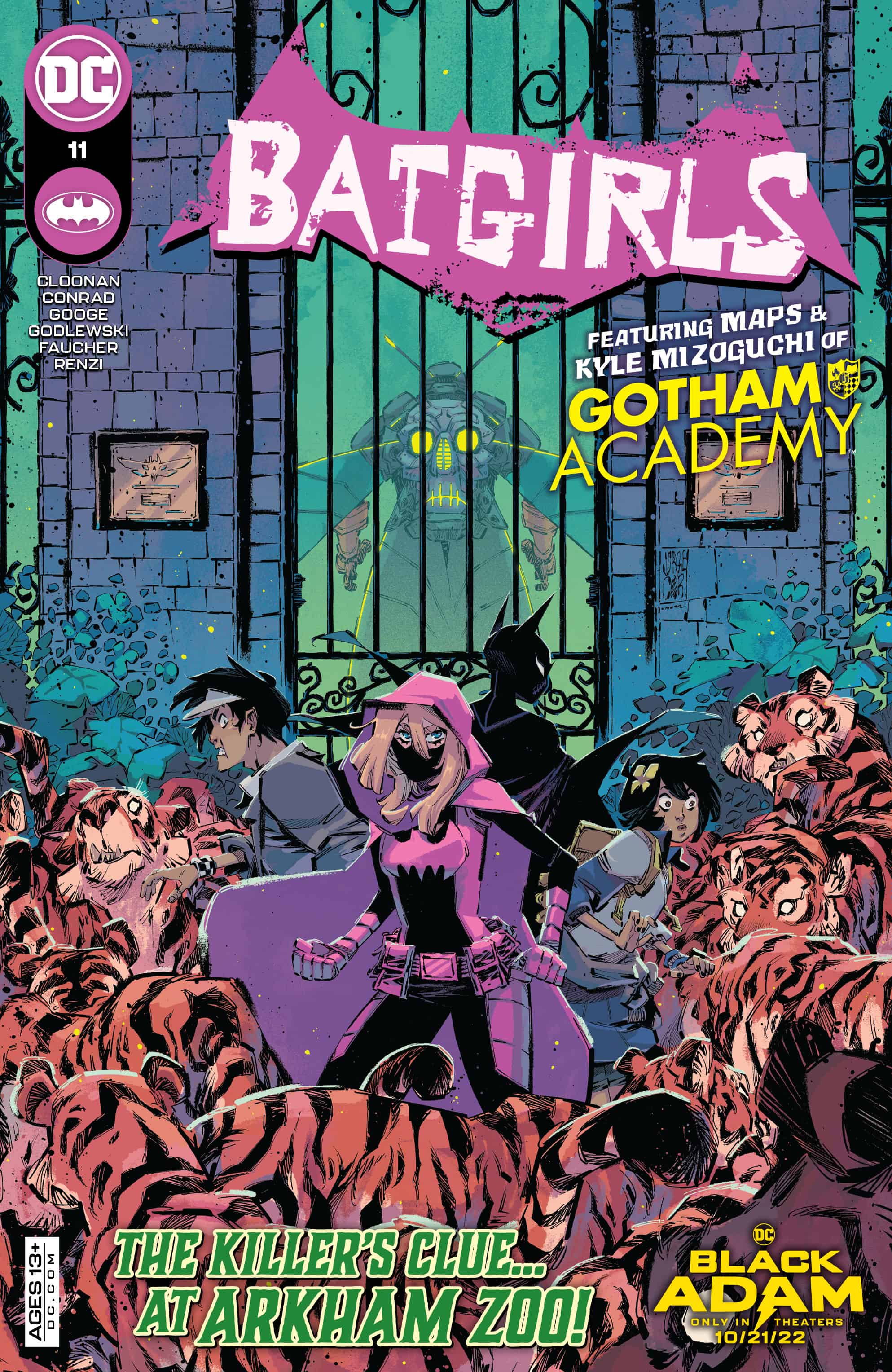 Coming back into comics later in life, there have been a number of characters and stories that I’ve been wanting to dive back into. One of them has been the new female heroes in the world of Batman, especially Stephanie Brown and Cassandra Cain, as I have heard fantastic things about those characters. So when I had the chance to review Batgirls, I hoped on the chance to get a preview of what these characters were like, even though I haven’t read any of the previous issues.

But based on this issue alone, I’m hoping there’s another run of these new characters that I can read that will get me excited about them. 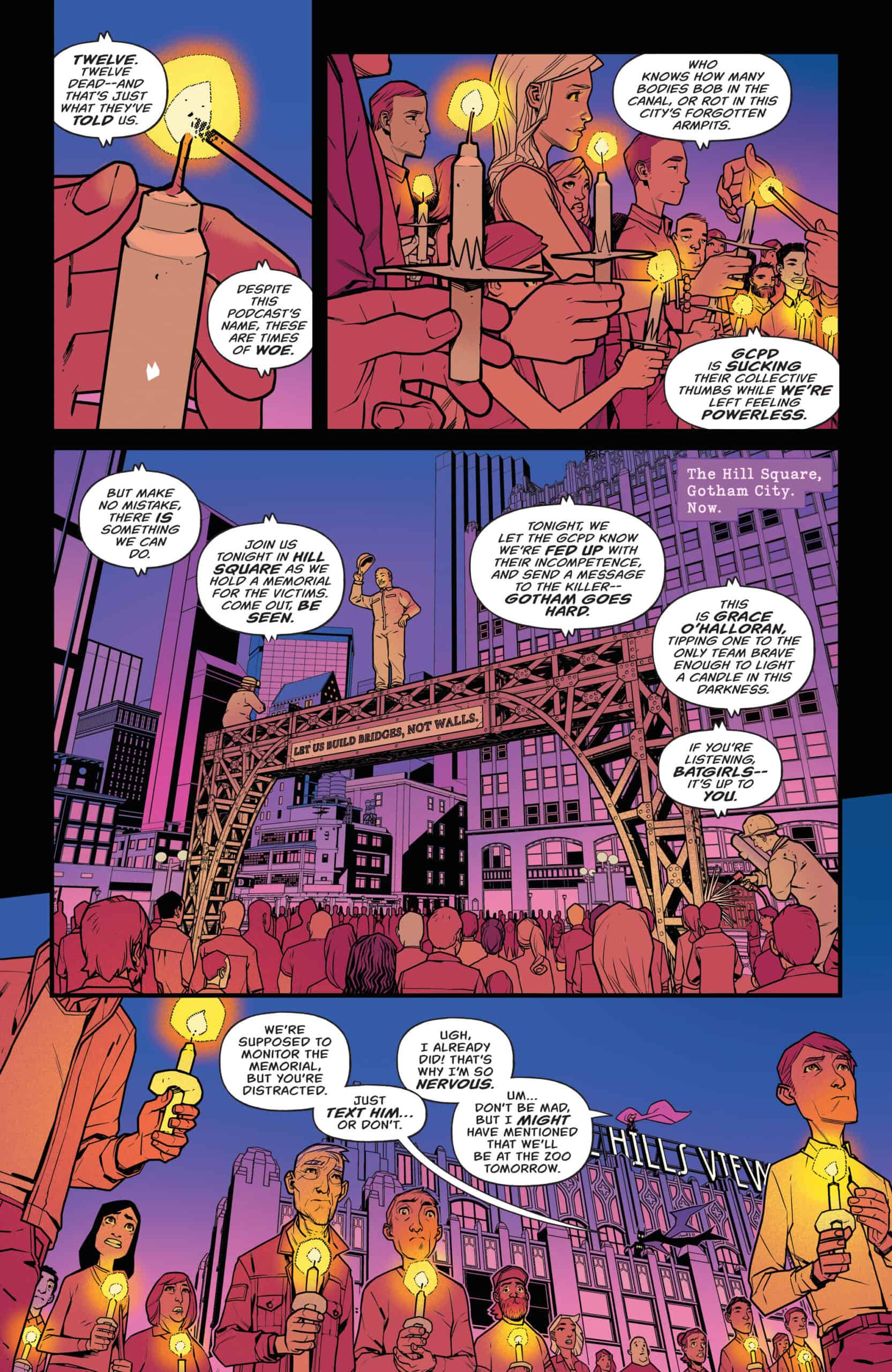 I’ll start with the story. Honestly, the story was fine if this comic was made for middle schoolers, and that may be the case since the issue is labeled for Ages 13+. But if it was meant for an older audience, I think this issue missed its target audience. The story starts off with Stephanie obsessing over waiting on a text from a boy (Kyle). I’m not sure how old Stephanie is, but her reactions and emotions were written as though she was in fact in a middle school relationship. The story has three clear acts, which is good – but act 2 is definitely the weaker of the three (again, if it was intended for an older audience). Even though it seemed like it may be a good story for tweeners, that’s not to say that the overarching story isn’t good. In fact, I really enjoyed seeing the varied relationships between the three Batgirls. Cassandra and Stephanie are clearly closer and have that established trust. In contrast, Barbara Gordon seems to have the more experienced of the two (even though she’s drawn as almost as young as them), and I like how we get to see these individual paths to solving mysteries.

(SPOILER ALERT IN THIS NEXT SENTENCE)

But I will say that the story was killed for me when it ends with the reveal of The Riddler asking the Batgirls a riddle: “Why were the Batgirls buried in Gotham Cemetery? Because they were dead.” Usually, the Riddler’s clues and answers are a lot more clever than this, so whether this is supposed to be a new Riddler or the canonical Edward Nygma/Nashton, it seems like he is not really living up to the reputation at all (but if that’s the point, then well done!) 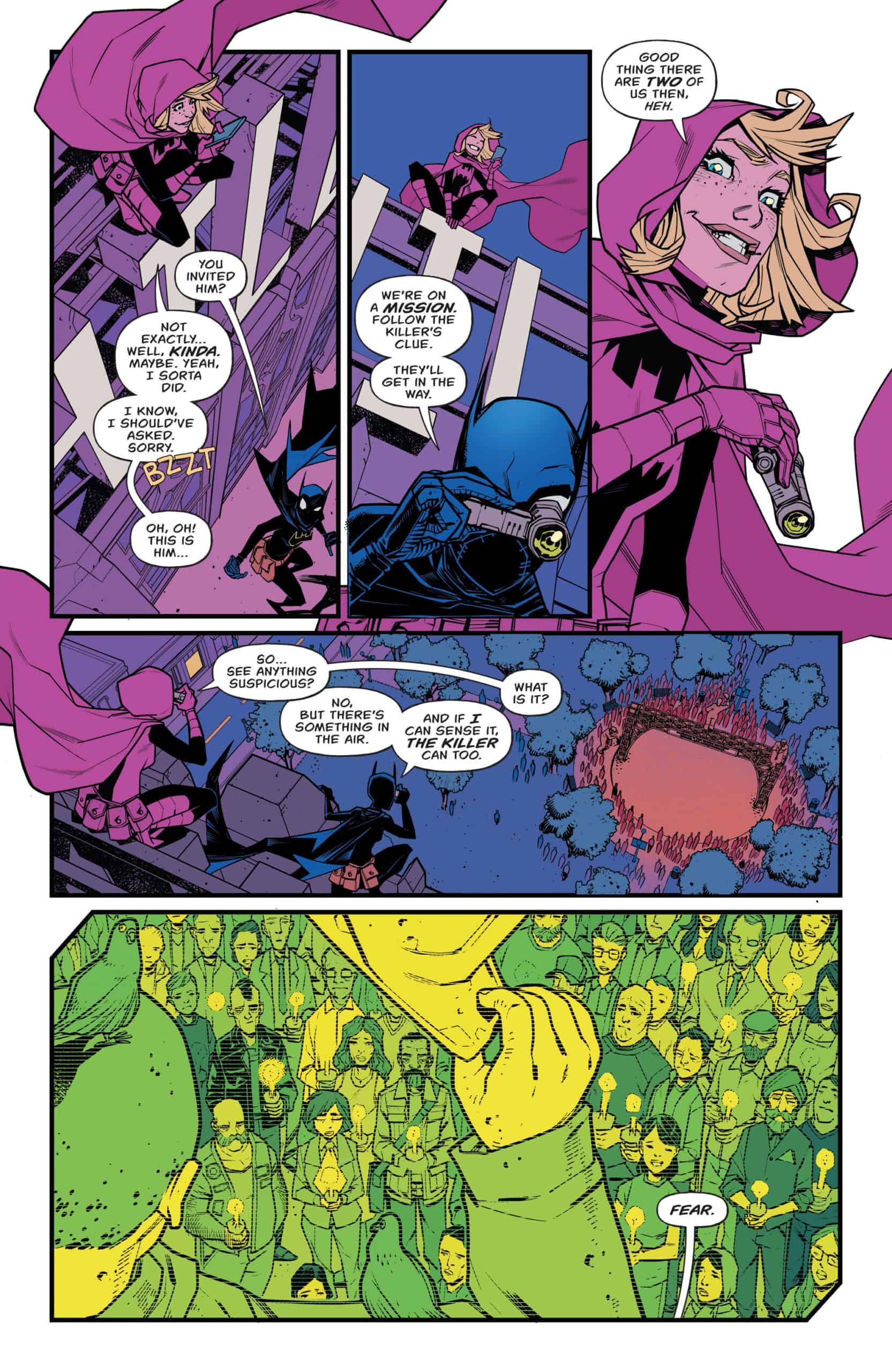 Although the story could be saved for me if it was meant for a younger audience, there’s nothing in the artwork that would save it for me. Everyone has their own style and tastes – but this one again seems to be for a specific, more niche audience. I didn’t enjoy the prominent background colors where the entire scene was flushed against a green or purple backdrop. There were also a number of instances where the characters’ skins were also colored in these same bright colors. If they were in a room where that was the lighting, then sure that makes sense. But it did not seem to be that way. It almost reminds me of a Nickelodeon cartoon animation style with the colors which, again, if that’s the audience they are drawing for, then they nailed it. But this is not something that I would generally recommend to a general audience, and it ended up being more distracting than anything else.

I was also distracted by how act two seemed to be very different in art style than acts one and three. This isn’t necessarily problematic since acts one and three were more aligned with each other in terms of mood and story, but act two’s change of style was almost jarring for me. When I got to that page, I thought that maybe it was a new, bonus story that they were adding. Lastly, some of the characters’ mouths were throwing me off as well. The artist drew lines of the mouth that went past the corners which were very reminiscent of the Joker, so at first, I thought that somehow these characters were affected or working for the Joker until I realized halfway through that it wasn’t connected at all. 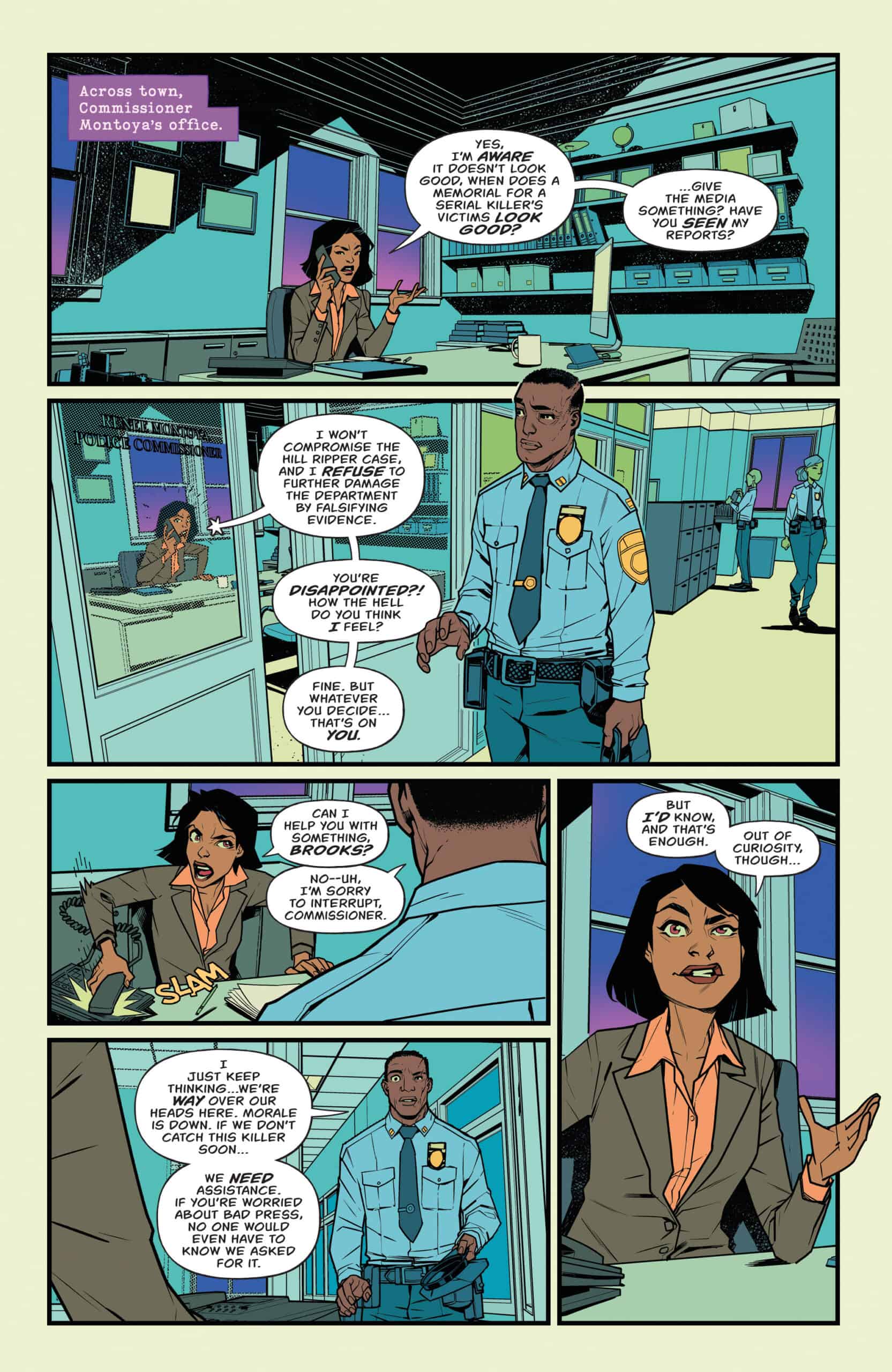 If this was a comic for a specific middle school audience that enjoys the very colorful animation style of cartoons, then I would say that this comic hit the mark. But if it was meant for a broader audience, then I would probably skip this story if you are looking for a Batgirls story about Barbara Gordon, Stephanie Brown, and Cassandra Cain.

This review was originally written and published for Comic Watch on October 11th, 2022.