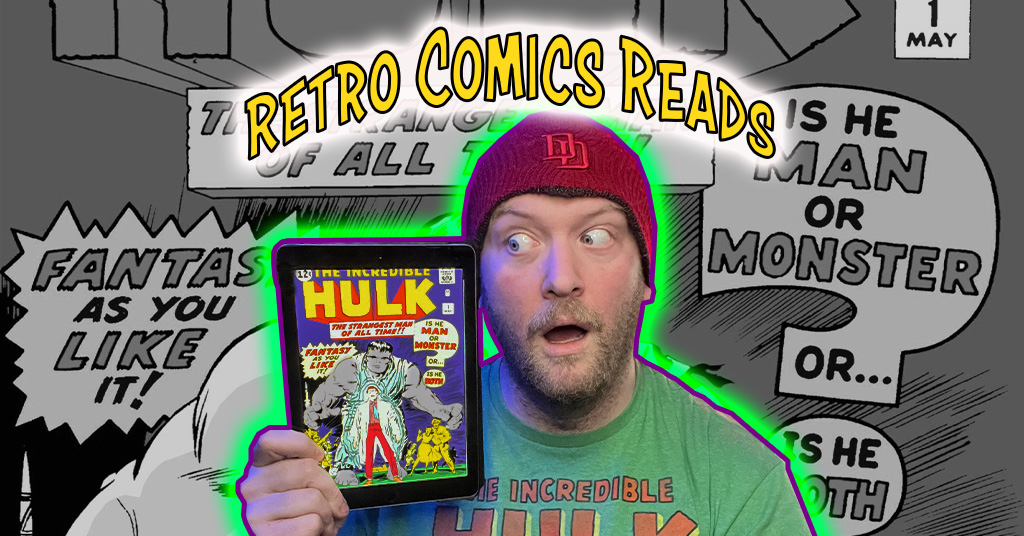 This article is part of a larger series. Check out Sean’s announcement and how you can send him suggestions for readings.

The first issue I reviewed as part of this series was Amazing Spider-Man #1 and it was a hit with you all – thank you so much! It actually received the most comments we’ve ever had thus far and that engagement means the world to me!

So going down the list of recommendations that was left for me on my original TikTok announcement, the next one was left by Nerd Initiative member Jeremy Bowersock (also known as JJs Comic Stuff):

The first Hulk run is always a decent read!

So I opened my Marvel Unlimited app, read the very first issue of Incredible Hulk, and here are my thoughts and observations about it

Incredible Hulk #1 – At A Glance

Overall, this comic was set against the backdrop of the Cold War. Similarly to Amazing Spider-Man #1, Incredible Hulk #1 was also split into four different parts inside the same issue, but it flowed as a continuous story, unlike the Spider-Man issue. And just like any of the classic comics, this issue has some obvious influences, some awkward era-based dialogue, and fun tidbits that we see in the beloved character today.

The Hulk’s Transformation Was NOT Triggered By Anger

Although Bruce Banner is popularly known for changing into the Hulk whenever he loses his anger, this is a different story in the first issue. In fact, Bruce figured out that he turns into the Hulk at night; his anger did not impact his transformation at all. Now, future issues may have revealed the anger trigger or may have retconned it later on, but there’s no indication here. In fact, nowhere in this story was the transformation associated with having an angry event prior to it. (By the way, this was a great panel using the colors and shading to show a “transformation” of sorts!)

The Hulk Is Influenced By Frankenstein

I really don’t think they tried to hide the fact that this was supposed to have resemblances to Frankenstein’s Monster. His head structure is similar to what we see in popular culture, and Dr. Banner’s assistant is named Igor for crying out loud!

Hulk Was Actually Intelligent (Or At Least, Not Dumb)

In the MCU, the Hulk is depicted as not having advanced language skills and knowledge (and I haven’t read a recent Hulk comic to know how he’s depicted in the comics now – I am planning to change that soon). But in the first issue, the Hulk is shown as having an intelligible conversation with people around him and can speak in complete, unbroken sentences. So this gave more of a Dr. Jekyll/Mr. Hyde vibe more than anything else.

The Hulk Was Not Originally Green

Many of you may know the story that the Hulk was originally gray, which we see on the front cover. The story goes that the gray prints didn’t work out very well and that other colors seeped through (as you can see here). But some of the panels in the second or third issue showed the Hulk with shades of green and Stan Lee liked it so much that he decided to keep him in his green form. But it’s definitely a little jarring seeing the Hulk in this odd shade of blue at first!

These Characters Make The Worst Spies And Detectives

For a scientist that works with the military, it’s clear that they are not the best in solving mysteries or hiding secure materials. The image on the left shows how the military police (MP) have been searching for the Russian spy Igor, even though he’s been Bruce’s assistant and openly talked to and been in the presence of the military. The image on the right shows where Bruce hid his top secret report, which was written in large letters and taped to the bottom of a transparent beaker. Nick Fury would be furious!

Signs Of The Times: Politics And Dialogue

This issue came out at a time when certain language was acceptable and this issue was no exception. On the left, we see the image where General Ross speaks to his daughter Betty about “man talk” and how she shouldn’t butt in (oof!). The image on the right is a page that shows even in the early days of comics, politics were always a part of the stories and discourse in their characters’ stories.

So those are the details that I picked up from reading this issue and loved. It’s been really fun going back to some of these first issues and getting a sense of how they started and how they changed and remain the same over time.

Below is my TikTok video going over these details. If there is a comic issue you want to suggest I read, feel free to reach out to me on social media (@CaptionedLife) and let me know!

This article was originally written and published for Nerd Initiative on September 22nd, 2022.